Fluorescein angiography (FA) allows study of the circulation of the retina and choroid in normal and diseased states. Photographs of the retina are taken after intravenous injection of sodium fluorescein, an orange-red crystalline hydrocarbon with a molecular weight of 376 daltons that diffuses through most of the body fluids.
It is eliminated primarily through the liver and kidneys within 24–36 hours via the urine. Eighty percent of the fluorescein is protein-bound, primarily to albumin, and not available for fluorescence; the remaining 20% is unbound and circulates in the vasculature and tissues of the retina and choroid, where it can be visualized.

To properly interpret a fluorescein angiogram, it is vital to understand retinal anatomy. The retina has a dual blood supply. The central retinal artery and retinal circulation serve the inner half of the retina, and the endothelial cell tight junctions provide the inner blood–retina barrier. Normally, neither bound nor unbound fluorescein can pass through this barrier. The choroidal circulation serves the outer half of the retina, and the RPE provides the outer blood–retina barrier. Fluorescein particles that are not bound to protein can pass through the fenestrated walls of the choriocapillaris but do not normally pass through the RPE or zonulae occludentes between adjacent RPE cells to gain access into the subretinal space. Therefore, fluorescein from the choroid cannot enter the neurosensory retina unless the RPE has a defect. Although the fluorescence in the choroid is partially blocked by the pigment in the RPE, it is visible as deep, diffuse background fluorescence.

Fluorescein is injected into a peripheral vein and enters the ocular circulation via the ophthalmic artery 8–12 seconds later, depending on the rate of injection and the patient’s age and cardiovascular status. The retinal and choroidal vessels fill during the transit phase, which ranges from 10 to 15 seconds. Choroidal filling is characterized by a patchy choroidal flush, with the lobules often visible. Because the retinal circulation has a longer anatomical course, these vessels fill after the choroidal circulation. The arterial phase of the angiogram occurs after the choroidal phase, with filling of the retinal arteries. The arteriovenous phase begins with complete filling of the retinal arteries and capillaries and completes with laminar filling of the retinal veins. This phase, which usually occurs approximately 1 minute after dye injection, is considered the peak phase of fluorescence, where the most detail is evident in the fovea. Over the next few minutes, the dye recirculates, with a gradual decline in fluorescence. In the late phases of the angiogram, the choroid, Bruch’s membrane, and the sclera stain. The larger choroidal vessels are often seen as hypofluorescent areas against this hyperfluorescent background.

The same machine does fundus color images, which are visual records that document the current ophthalmoscopic appearance of a patient’s retina. They allow the physician to further study a patient’s retina and to identify retinal changes on follow-up. 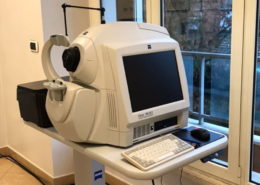 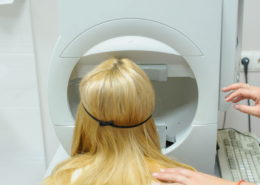 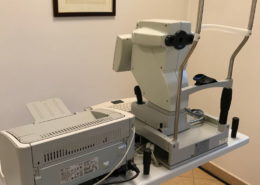 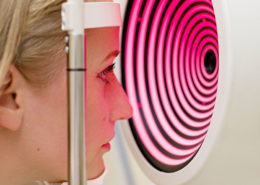 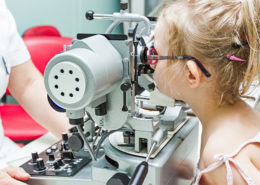 Do You Want More Information?